In my previous post, I had written about principal component analysis (PCA) for dimensionality reduction. In PCA, the class label of each and every example, even if available, is ignored and only the feature values from each example are considered. Thus, PCA is considered an unsupervised approach.  The emphasis in PCA is to preserve data variability as much as possible while reducing the dimensionality. Linear discriminant analysis (LDA) on the other hand makes use of class labels as well and its focus is on finding a lower dimensional space that emphasizes class separability. In other words, LDA tries to find such a lower dimensional representation of the data where training examples from different classes are mapped far apart. Since LDA uses class labels, it is considered a supervised learning approach.

Lets look at few equations to figure out the steps for applying LDA. We begin with N d-dimensional feature vectors,

. Let a vector of unit length w define the line onto which the N data vectors are mapped to produce projections

The means and spreads, more commonly known as scatter, of the projected data points are then:

is called the total within-class scatter of the projected data points. The Fisher criterion, measuring the goodness of projection onto the line defined by w is thus expressed as

Instead of searching for optimal w to maximize the criterion, it turns out that a close form solution exists. It is given by the following relationship

are the means of class 1 and class 2 examples in the original space. The matrix

is known as the within-class scatter matrix; it is formed by summing the scatter matrices of class 1 and class2. That is

Thus, the steps for applying LDA are:

Lets consider a business that uses three skill tests to assign its employees to one of two groups: A team and B team. We have test scores of ten employees, five from each group. Thus, we have ten three-dimensional vectors from two classes. We will obtain a one-dimensional representation of these ten three-dimensional examples by following the steps outlined above. Lets first describe the input vectors and calculate the mean vectors of team A and team B.

Next, we calculate scatter matrices of individual classes and add them to get the within-class scatter matrix.

Note that we could have calculated class scatter matrices as shown below. This is because the sample covariance matrix is obtained by dividing every term of the scatter matrix by a factor of number of examples minus one.

Once we have the within-class scatter matrix and mean vectors, we calculate the solution vector to project our three-dimensional data to a line by following the steps shown below.

We can now map our ten examples to one dimension. We can also calculate the projected means. Assuming that two classes, team A and B, are equally probable, we can calculate the midway point between the two projected means. This point, designated as AB_cutoff point, can be used to perform classification of new data.

A graph of the resulting projections is shown below; it clearly shows that team A and team B data gets projected separately. 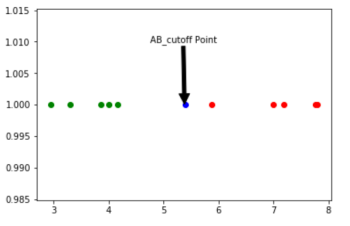 How to Apply LDA for More than Two Classes?

Not all classification problems are two class problems. So the question is how do we perform dimensionality reduction with LDA when the number of classes is, say, K. In such situations, the LDA approach is known as the multiple discriminant analysis and it uses K-1 projections to map the data from the original d-dimensional space to a (K-1)-dimensional space under the condition that d > K.

Lets represent the K-1 projections through the mapping

, where W is a (k-1) x d projection matrix with each row representing a discriminant function. The projected vectors

are of K-1 dimensions. Following the requirement that projected points from different classes should be far apart with small spread, the solution for projection matrix W is given by the eigenvectors corresponding to the top k-1 eigenvalues of the following matrix

is the within-class matrix as defined earlier, and

is known as the between-class scatter matrix with m being the mean of all the d-dimensional examples from K classes.

Lets go back to our A and B teams example and assume that we have another set of three-dimensional examples based on three skill scores. These examples represent members of team C. To perform dimensionality reduction on our three teams data, we will now generate two projections using LDA. To do this, we first compute team C mean and scatter.

Having calculated the needed matrices, we can now compute the eigenvalues and eigenvectors of the

First and third eigenvalues are the two largest eigenvalues. Thus we select the corresponding eigenvectors to form the projection matrix and project the data to two dimensions. The steps for these and a scatter plot of the projected points is shown below. 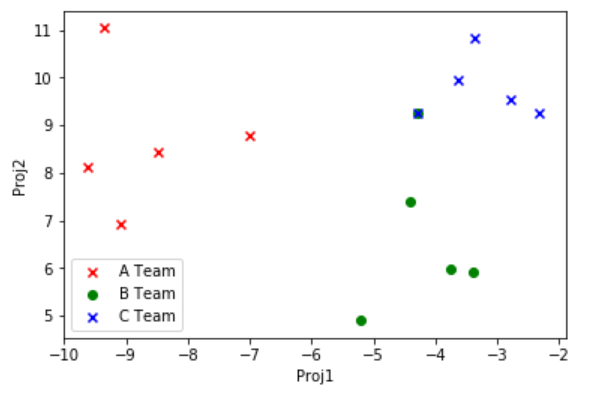 A Comparison of Dimensionality Reduction via LDA and PCA

We will use a well known data set and apply LDA and PCA to see what kind of results are obtained. We do this by using the wine data set available in the scikit-learn machine learning library. This data set has 178 examples from three classes. Each example consists of 13 real-valued features. In this case, we will use the LDA and PCA class from the scikit-learn library.

The resulting projections in two-dimensions by the both methods are shown below. It is clear from these projections that the dimensionality reduction by the LDA approach maintains class separation well while the reduction by the PCA has data from all three classes mixed up.