The Naive Bayes (NB) classifier is widely used in machine learning for its appealing tradeoffs in terms of design effort and performance as well as its ability to deal with missing features or attributes. It is particularly popular for text classification. In this blog post, I will illustrate designing a naive Bayes classifier for digit recognition where each digit is formed by selectively turning on/off segments of a seven segment LED display arranged in a certain fashion as shown below. The entire exercise will be carried out in Excel. By writing Excel formulas and seeing the results in a spreadsheet is likely to result in a better understanding of the naive Bayes classifier and the entire design process.

We will represent each digit as a 7-dimensional binary vector where a 1 in the representation implies the corresponding segment to be on. The representations for all ten digits, 0-9, is shown below. Furthermore, we assume the display to be faulty in the sense that with probability p a segment doesn’t turn on(off) when it is supposed to be on(off). Thus, we want to design a naive Bayes classifier that accepts a 7-dimensional binary vector as an input and predicts the digit that was meant to be displayed.

A Naive Bayes (NB) classifier uses Bayes’ theorem and independent features assumption to perform classification. Although the feature independence assumption may not hold true, the resulting simplicity and performance close to complex classifiers offer complelling reasons to treat features to be independent. Suppose we have

. According to Bayes’ theorem, the probability that the observation vector

is given by the following relationship:

Assuming features to be independent, the above expression reduces to:

The denominator in above expression is constant for a given input. Thus, the classification rule for a given observation vector can be expressed as:

There are two major advantages of the NB classification when working with binary features. First, the naive assumption of feature independence reduces the number of probabilities that need to be calculated. This, in turn, reduces the requirement on the size of training set. As an example, consider the number of binary features to be 10. Without the naive independence assumption, we will need to calculate

In order to design a classifier, we need to have training data. We will generate such data using Excel. To do so, we first enter the seven dimensional representation for each digit in Excel and name the cell ranges for each digit as digit1, digit2 etc. as shown below. 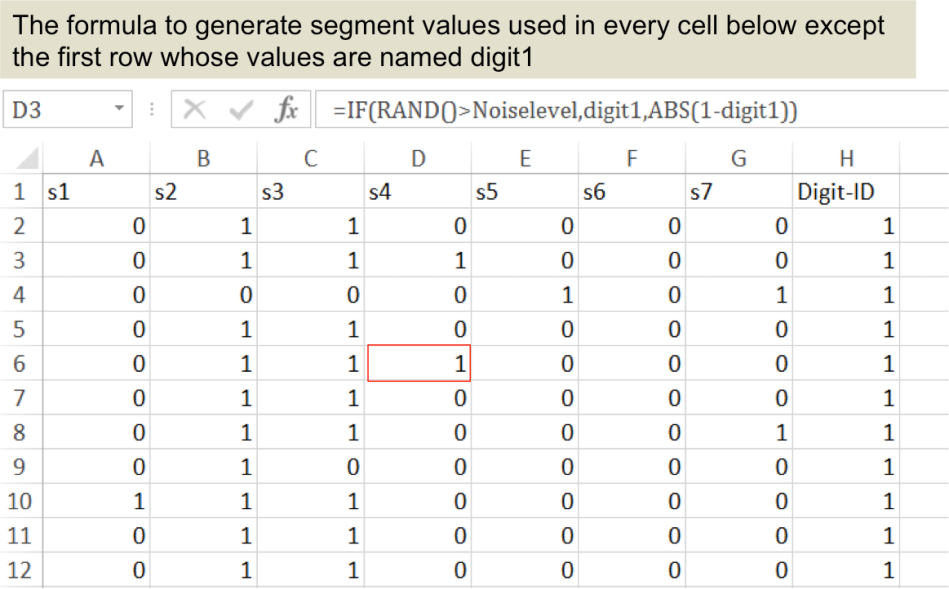 The 200 training examples generated as described are next copied and pasted into a new worksheet. This is the sheet that will be used for designing the classifier. The paste operation is carried out using the “Values Only” option. This is done to avoid anymore changes in the generated noisy examples.

Since only two possible states, 1 and 0, are possible for each segment, we can calculate the probability of segment 1 being equal to 0 conditioned on that the digit being displayed is digit 1 by the following relationship:

In practice, however, a correction is applied to conditional probabilities calculations to ensure that none of the probabilities is 0. This correction, known as Laplace smoothing, is given by the following relationship:

Adding 1 to the numerator count ensures probability value doesnot become 0. Adding 2 to the denominator reflects the number of states that are possible for the attribute under consideration. In this case we have binary attributes. Note that in text classification applications, for example in email classification, where we use words in text as attributes, the denominator correction term will be V with V being the number of words in the dictionary formed by all words in the training examples. Also you will find the term Bernoulli NB being used when the feature vector is a binary vector as in the present case, and the term Multinomial NB being used when working with words as features.

While the higlighted columns indicate the highest probability value in each row and thus the classification result, the following formula in column “S” results in the classifier output as the label to be assigned to the seven component binary input representing the status of the faulty display.

Next, comparing the labels in columns H (true label) and S (predicted label) we can generate the confusion matrix to tabulate the performance of the classifier. Doing so results in the following confusion matrix with 80% correct classification rate.

The 80% accuracy is for 20% noise level. If desired we can go back and rerun the entire simulation again for different noise levels and determine how the accuracy varies with varying noise levels.

Finally, it would be nice to have a visual interface where we can input a row number referencing a test example, and display the faulty digit as well as the predicted digit. Such a display can be easily created using conditional formatting and adjusting the shape and size of certain Excel cells (See a post on this). One such display is shown below. By entering a number in the range of 2-51 (50 test examples) in cell AE1, we can pull out the segment values using Indirect function of Excel. For example, the segment value shown in cell W3 in figure below is obtained by the following formula =INDIRECT(“A”&$AE$1). Similary, the value in cell X3 is obtained by =INDIRECT(“B”&$AE$1), and so on. The segment values in the cell range W3:AC3 are then used in conditional formatting. The predicted digit display is based on segments states corresponding to the predicted digit label read from “S: column for the row number in AE2.

As this exercise demonstrates, the design of a naive Bayes classifier is pretty straightforward. Hopefully working with Excel has provided a better understanding of the steps involved in the entire process of developing a classifier.